Menstruation should be a beautiful thing. It’s a universal experience for women and it’s a natural bodily process so that a woman can become pregnant, give birth, and raise the next generation of our world. So why is it such a taboo topic? Why are we ashamed? And why is it such a different experience for girls in places like Nepal and Tanzania than in developed countries?

In the United States, companies like Kotex and Maxi-Pad have gone to great strides to make light of and break the taboo of menstruation, with commercials and advertising exposing men’s reactions to tampons, telling the truth about the ups and downs of girls’ periods, and using red liquid instead of the pale blue color that no one actually bleeds. In New York City, Kotex’s social experiment found that 40 percent of the men approached were afraid to buy tampons. One even offered to buy toilet paper instead! The real question is, why is this such a big issue? The second is, how can we expect people around the world to get it right, if we can’t even break the taboo ourselves?

We may joke about it, but in many parts of the world, menstruation and the associated taboo surrounding it cause real harm. To start at the beginning, many girls around the world are not taught what menstruation is until menarche, or their first period. Many girls think they are dying when this happens. Many girls have explained that there is a ‘culture of silence’ around menstruation, including in their families. Male family members have no knowledge of menstruation and girls do not feel comfortable even talking to their mothers about the subject. In turn, this ‘culture of silence’ creates a culture of shame and embarrassment around menstruation in families and communities.

This culture gets in to schools, as well. Just over one-third of schools in the developing world have adequate sanitation facilities for all students, including the boys. When girls have their periods, they need more than basic sanitation facilities – they need locking, single-gender bathrooms with clean, running water and a place to change clothes. Without it, many girls either miss a week of school each month or drop out altogether. A schoolgirl in Afghanistan said, “We are eager to build up our education and have a good reputation in the society, so we don’t like to be absent from school each month because of unavailability of the school [water, sanitation and hygiene] facility.”

In many countries, the culture and religion declare women and girls to be unclean during their periods, and there are many restrictions placed on them during this time. The practice of requiring women to isolate themselves, called chapaudi in Nepal, occurs all over. Many times women cannot sleep in their own homes and must sleep in sheds or caves. In some places, girls are not allowed to use the same water source as everyone else when they are menstruating. All of this, the taboo and shame and culture, increase women and girls’ risk of infection, snakebites, violence, and hypothermia.

How can we break the taboo? We must break the silence. Break the silence in our own families, communities, and cultures, and help other girls to do the same. Let’s make some noise about menstruation and empower girls around the world to speak out, learn from each other, and live their lives without shame and embarrassment about a natural and beautiful process.

For more information and some organizations doing great work on menstrual hygiene, check out:

The Pulitzer Center on Crisis Reporting’s collection on chapaudi

If Men Could Menstruate

Imagine Being a Young Girl Living in Poverty. Then Add to that, Not Being Able to Afford Feminine Hygiene Products. 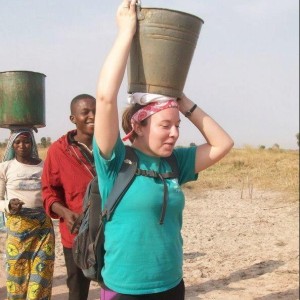