Malian women are strong. They work dawn to dusk taking care of their families and are usually the first to wake up and the last to go to bed. Usually they will have anywhere from 4 to 10 children. They cook, clean, chop firewood and often try to start small businesses so that they can bring in some income. All of this is usually done with a child on their back and one to two in tow. In Mali, women and men have separated incomes. The man is responsible for providing money for food and the general running of the household. Any money the women bring in can be used by her at her discretion. Having a business teaches these women how to sustain themselves. The culture in Mali is rapidly changing and it is very common to see small street businesses run by women selling anything from household items to produce.

Mali is taking many steps forward. After the military coup last March 2012, just 39 days before the election, an interim government was established in Mali. There are 31 ministers, four of whom are women. Yeah Samaké played an important role in the establishment of the interim government after the coup. The goal of this new unity government remains the same as before. First, to regain the lost Northern territory and second, to organize elections. Mali has a bright future with Yeah Samaké as President. The presidential elections in Mali will happen on July 28, 2013.

Yeah’s party, Party for Civic and Patriotic Action (Parti pour l’action civique et patriotique – PACP) has done a number of initiatives to encourage entrepreneurship among women and provide education for women to improve their quality of life. Last year, in an effort to encourage increased women’s entrepreneurship, Yeah Samaké and the PACP hosted a free 5-day workshop for 25 women to teach them how to make soap and shea butter. This was an awesome opportunity for women to learn a business that they could then take back to their own regions and implement. Shea butter is a very essential product in Malian everyday life. It is used for anything from a cosmetic value to a medicinal ingredient. Also, due to the social nature of women in Mali, by teaching one woman, you are in essence teaching the entire group she will associate with.

Yeah’s wife, Marissa Samaké said, “I am a big believer in empowering women and it is my hope that projects of this nature will educate women and then give them the hope to change their lives and the lives of those around them.”

Marissa Samaké: Working in the Villages

Marissa Samaké has been very committed to helping the women of Mali. In her own initiative last year, she visited the women in the village of Farabana and committed to provide two months of food for the children. During her visit, she saw them prepare the meal as they added milk, sugar, crushed peanuts, and tamarind to the millet mixture. Any extra food could be sold by the women to the neighboring villages to make some much-needed income. Of that experience, she said:

“I was very impressed with these women. They were happy in spite of all their hardships. They did not complain about what they did not have. Rather they were searching for opportunities to create solutions to their problems… The women and children of Farabana taught me a lesson. They taught how sometimes it is the small gifts that matter because the impact is the greatest. 2 months food does not cost an immense amount of money.”

Read more about Marissa Samaké’s project for women in Mali.

As mayor of Ouélessébougou, within his first three years, Yeah has increased the tax collection rate to 75% from 10% when he first took office. With additional resources, Yeah has done many things for his community. One of the biggest things Yeah has done for his community is he helped to build a hospital. This has a huge impact on maternal mortality. Before this hospital, women had to travel several hours to a hospital, often not making it in time. The maternal mortality ratio in Mali is 460 for 1,000 births (UNICEF). He has also helped to build the first public high school in the region and 15 middle schools throughout Mali, as well as the largest solar panel field in West Africa (MaliWeb). With increased opportunities for education and increased energy resources, particularly more girls are attending secondary school in Mali. Only 24% of girls in Mali attend secondary school (UNICEF).

A political campaign in Mali is very unique. It is very challenging to share a message with 15.1 million people with limited access to radio, television, and limited resources and transportation. Yeah and his party, PACP, travel all around the country, visiting villages and holding rallies. When PACP visits a village or community, they also take time to specifically meet with the women.  Recently, the PACP party members traveled to Niarela where the leader of the women in the village, a woman by the name of Sympara, committed that she would support Yeah Samaké and the PACP vision for a new day in Mali.

32 days until the elections in Mali! Let’s continue to empower women.

Get involved. Become passionate about a good cause. Make a difference.

——–
I am the North American Campaign Manager for Yeah Samaké, a presidential candidate for Mali, West Africa under the Party for Civic and Patriotic Action (PACP).  To learn more about Yeah or donate to his campaign visit http://samake2013.com.  You can also read more about why #isupportyeah.

Yeah Samaké is a native of Mali, West Africa and he comes from a very humble background. His father was a visionary man and he sacrificed so that all his 18 children could receive an education. Yeah received a Bachelors in Teaching English as a Second Language in Bamako. In 2004, Yeah co-founded the Mali Rising Foundation, which under his leadership has built 15 middle schools throughout Mali. He holds a Master of Public Policy from Brigham Young University (BYU). He is currently the mayor of Ouélessébougou, Mali and the Vice President of the League of Mayors. 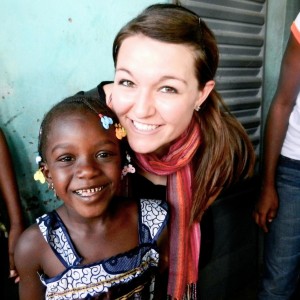