The Story of Women for Afghan Women

In the spring of 2001, six months before 9/11, a group of passionate women’s rights activists came together with the goal of garnering international attention on the plight of Afghan women and girls living under Taliban rule. Little did these extraordinary women know that their efforts to expose the world to the brutalities and injustices of the Taliban period would lead to the founding of one of the leading women’s rights organizations in Afghanistan and the transformation of thousands of lives.

Women for Afghan Women (WAW) was founded in 2001. While researching the state of women’s rights in Afghanistan, WAW co-founders quickly learned that Afghan women living in New York were facing similar abuses and isolation as their sisters at home. In order to respond to this crisis, in 2003, WAW opened its New York Community Center. The Center serves under-educated (mostly illiterate) Afghan women immigrants and their families with a multitude of empowerment programs and human services.

The same year WAW launched its Community Center to help local Afghans, WAW Executive Director, Manizha Naderi, returned to Afghanistan – the place of her birth – for a conference on women’s rights.

“When I returned to Afghanistan for the first time since leaving as a child, I truly learned just how strong and resilient my Afghan sisters are.”

While in Afghanistan, Manizha met three young women who would change her life and the course of WAW forever.

“After hearing their stories, I vowed to go back to advocate for change for all Afghan women,” Manizha said.

By 2007, WAW opened its first Family Guidance Center (FGC) and Shelter in Kabul. WAW’s FGC is the first program of its kind in Afghanistan, offering victims of human rights violations protection, legal services, and culturally appropriate counseling and mediation support. WAW’s FGC also conducts regular outreach in local communities to teach individuals about women’s rights and the services available to them through WAW.

In the six years since launching its first FGC, WAW has expanded its programs to 10 provinces in the country. WAW now operates 27 facilities that provide loving homes, education, vocational training, and protection from and justice for human rights violations to women and children around the country. WAW has also educated over 125,000 community members on women’s rights.

In our 12 years of service, WAW has helped nearly 10,000 women and children reclaim their lives and find hope for the future; girls like Sahar Gul, a 13-year-old sold into marriage and brutally beaten and tortured by her in-laws for refusing to become a prostitute.

In New York, WAW’s programs have also made a difference. Through WAW, women who never had access to education in their entire lives are now attending college, are able to find and maintain employment, and have escaped domestic violence.

In November 2012, a delegation of Afghan parliamentary members, including well known women’s rights activist and 2014 Afghan presidential candidate, Fawzia Koofi, visited WAW’s FGC and Shelter in the northern Afghan province of Balkh. The delegation came to the shelter to meet a five-year-old girl who had been raped and was recovering under WAW’s care. They spent the day with the child and other women living in our shelter. By the time the delegation left the facility, they were inspired and awestruck by the work WAW is doing to help women and children in Afghanistan.

“Women for Afghan Women is the best organization in Afghanistan,” Ms. Koofi said.

When Manizha returned to Afghanistan in 2006, she searched for the three women she had met back in 2003. She was only able to locate Huma, the 16-year-old girl who was in prison for running away from her forced marriage. WAW advocated on Huma’s behalf and convinced the local police chief to release her into our care. WAW brought Huma to Kabul and found her loving foster parents. Huma went back to school and started practicing judo karate. She quickly discovered that she has a talent for the sport and has since traveled the world participating in judo competitions.  Huma recently graduated from high school and is attending university. 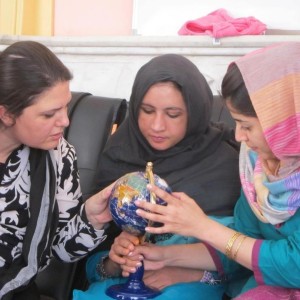