At age 14, Han Su Myat moved from Myanmar to sunny California with her mother and younger brother.  Her father had moved to America when she was 3 years old.  Since Myanmar was closed to the world at that time, Han Su and her family received no mail or phone calls from him for those 11 years of separation.

Han Su spoke little English when she arrived in America.  She couldn’t even ask questions or directions.  Kids in her new school laughed at her accent.  After a girl in her home economics class threw needles at her, she felt scared and isolated. She missed her Burmese friends. There was no diversity in her American school.

Education became Han Su’s refuge and hope.  She studied hard to get into honors classes. She believed she would be safe there and find new friends with common goals. Every night after finishing her homework, she helped her brother with his.  Through hard work and perseverance, Han Su graduated last year from UCLA. She speaks English well, and has a close circle of friends.

Now at age 24, her goal is to attend medical school, become a doctor, and return to Myanmar to help her people and her family achieve a better life.

Han Su’s early life in Myanmar was not easy.  Her family was poor, and caretaking of her elderly grandparents was difficult.  There was no electricity – only candles.  She attended government school where teachers frequently didn’t even come into the classrooms.  They just gave assignments to copy from books.  Discipline (beating or removal from school) was harsh.

Han Su learned that life in America, the land of opportunity, wasn’t easy either – there was just a different set of problems.

When I first met Han Su in January in the Ayeyarwady Delta, she had returned to Myanmar for the first time for a visit. She volunteered with one of Educational Empowerment’s partners, Helping the Burmese Delta.  When Han Su met high school girls in the Delta, they were eager to practice English with her.  They looked up to her. She realized that once she had been like them. Because she had an education, she could now help them. It made her feel really good.

When I asked Han Su what advice she would share with Burmese girls, she said:

“Believe in yourself.  Don’t be afraid of failure. Try anything you want.  Even if you fail and make mistakes, try again. You might be successful!” Han Su Myat

Han Su’s story is an inspiration and yet another example of the power of education. If you want to empower girls to follow their dreams,

Educational Empowerment was created by women and for women and girls. EE promotes literacy and education for children, families and communities severely affected by poverty and injustice in Myanmar. By empowering women and girls through education, we position women in Myanmar to attain their equal rights. 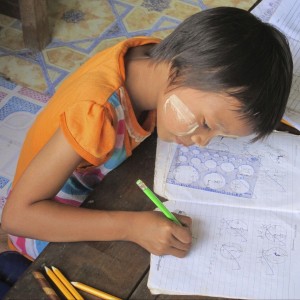