#7: Midwives in America: Interview with Barbara Sellars and Nicole Marshall

Yesterday, 5th of May, was International Day of the Midwife, and in this episode of The Mom Pod, Emma Saloranta dives into the history and role of midwives and midwifery in the United States through an interview with two Certified Nurse Midwives from a New York-based midwifery practice, CBS Midwifery.

Barbara Sellars and Nicole Marshall run CBS Midwifery in New York, and together have delivered literally thousands of babies. When I got pregnant myself in early 2014 and began to research my options regarding pregnancy and birth, I came across an article in New York Times about midwives in New York, which featured an interview with Barbara. It was only at that point when I became to realize that unlike in my native country Finland, and most of Europe, in the U.S. a midwife-attended birth is still a rare thing, and the norm is to have an obstetrician handle the prenatal care and birth – in 2014, only 8.3% of births in the U.S. were attended to by midwives. Unlike in many other countries, midwives in the U.S. are also quite unregulated, and there are many different types of midwives, ranging from Certified Nurse Midwives who have received medical training and degrees both in the fields of nursing and midwifery, to so-called “lay midwives” or “direct-entry midwives”, who don’t have nursing training and often receive their skills and knowledge through self-education, apprenticeships and midwifery schools that are not associated with nursing programs.

Barbara and Nicole shared some very interesting and eye-opening insights about why the care of pregnant women and births in the U.S. was moved from the hands of midwives into the hands of doctors, and what this has resulted in. Studies show that a midwife’s presence is linked to better health outcomes for both women and their babies, and a study in the UK showed that healthy women with low-risk pregnancies were actually safer giving birth in the hands of midwives than doctors. Similar results have been seen in other countries as well. United States has one of the highest infant mortality rates in the developed world, and is one of only eight countries in the world where the maternal mortality rate is actually increasing – and many experts link these problems partly to the over-medicalization of pregnancy and birth, an unnaturally high c-section rate, and the huge gap in access to proper prenatal, postnatal and pediatric care between socio-economic groups.

“By watching, listening and observing the mother in labor, we can assess the progress of labor and the state of the mother without pushing our fingers up the vagina every 2 hours.”

In the case of healthy, low-risk pregnancy, midwife-attended births are known to result in better health outcomes for mothers and babies. According to a recent study by Cochrane, mothers whose pregnancies and births are tended to by midwives have less medical interventions, such as epidurals, episiotomies and instrumental births, less risk of losing the baby in pregnancy or in the first months following birth, and reported higher satisfaction with their care than mothers who received other models of care during pregnancy and birth. My hope is that midwives will become available and affordable to all mothers in the U.S. – and around the world – and that midwives in America will receive the respect and acknowledgement for the incredible work they do for the health, rights and empowerment of mothers and their babies.

Do you like The Mom Pod and want us to keep doing what we do? Help us keep our podcast going! We’ve launched a crowdfunding campaign to support the production costs of The Mom Pod, and need your help to reach out goal. You can help us by sharing information about this podcast and the campaign with your colleagues, friends and family and by donating to our campaign if you can! 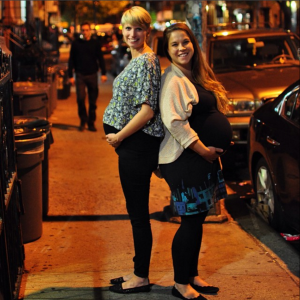