Women In Politics: Moving From the Periphery Toward Peace, Justice, & Strong Institutions

With our sights and Twitter feeds plugged into #2030NOW, the UN has amplified not only the Sustainable Development Goals but also asked us to consider the world we want to live in in 2030. Regardless of our political affiliations, government is highly influential in shaping our world and governance is reflective of societal norms and power dynamics. A low representation of women in government does not lend itself to the inclusive, transparent, and just governance systems we have pledged to achieve by 2030 via Sustainable Development Goal 16, which calls for Peace, Justice, and Strong Institutions.

In excluding women from government, women’s preferences, voices, and citizenship are all disempowered. However, women advocates, UN organizations and others have stepped up and voiced these concerns and are actively working to increase female participation in government.

For example, UN Women’s primary goal is to empower women and girls and has used the platform of Goal 16 to elevate the importance of transparent, inclusive governance in empowerment. Their solution involves developing the capacity to conduct gender analysis, monitoring systems to track good governance and women in government and collecting adequate sex disaggregated data to assess gender equality and empowerment in nations around the world.

United Nations Development Programme (UNDP) Administrator Helen Clark spoke on increased government transparency for the betterment of women in September: “Advancing SDG 16 helps advance progress on all the other goals as effective institutions are central, for example, to ensure women’s full and effective participation and equal opportunities for leadership.”

Clark herself has held a number of positions in government, not only as the head of UNDP, but also as the 37th Prime Minister of New Zealand, and a forerunner in the appointment of the next UN Secretary General. At the +SocialGood Summit, Clark spoke on her Secretary General aspirations with fellow female leader, Former President of Malawi Joyce Banda, “There is a job to be done here. That is going to take leadership and someone with a profile like mine. So I am standing my ground and hoping that I can be the one to get it done.”

Helen Clark’s confidence in her abilities and pursuit of leadership positions inspires young girls and women globally. Seventeen-year-old Sarah Gulley, New Zealand native, is inspired by Clark. As a young person, and girl advocate Ms. Gulley hopes women politicians be criticized for their politics rather their hair, hemlines and husbands, and in shifting the dialogue around women in politics young girls are inclined to become politically active and aware.

Rwanda has the highest percentage of female politicians with 64% of the Lower House and 39% of the Upper House, and one of only two countries with greater than 50% female participation in government. The First Lady, Jeanette Kagame, however, believes female participation is necessary in not only the politics but also the economics of government, saying,

“A global female leader, perhaps correctly, stated, ‘too many women, in too many countries speak the same language: silence.’ We see several girls lacking confidence, preferring to remain on the periphery of economic progress.”

Kagame has further refuted that economic success be hindered because of African culture, and stressed the importance of employing economic opportunities for female empowerment.

Former U.S.  Secretary of State Madeline K. Albright, famously said, “Every country deserves to have the best possible leader and that means that women have to be given a chance to compete. If they’re never allowed to compete in the electoral process then the countries are really robbing themselves of a great deal of talent.”

As a girl interested in politics, I of course hope to see more women and girls become political leaders. And by 2030, I do not doubt that we will have the first female leader of America, the UN, and all other major countries, but I am concerned that they will be the first and also the last. Besides electing women to politics, I hope we continue to inspire and empower young women and girls to becoming female leaders.

For us to achieve the objectives of Goal 16 and transform our government into transparent, inclusive institutions by 2030 we must empower young girls to be involved in every level of politics. And with the guidance of a generation of formidable female leaders like Madeline Albright, Jeanette Kagame, Helen Clark and many others, we can achieve #2030NOW. 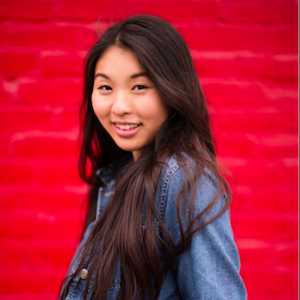