Linking with Those at Standing Rock

I stand in solidarity with the water protectors.

Native Americans from nearly 300 tribes united to protect the water by protesting the Dakota Access Pipeline. This pipeline would transport 450,000 barrels of crude oil per day across sacred burial grounds and Lake Oahe on the Missouri River, the main source of drinking water for Standing Rock.

According to the Fort Laramie Treaty of 1851, Standing Rock Reservation is a sovereign native nation, meaning that Energy Transfer Partners has no right to construct this pipeline on their land without their permission. The US Government, per their own treaty, has no right to let them.

I stand in solidarity with the water protectors as a woman.

I don’t know most of the women water protectors. They are just images on Facebook, people I’ll never meet. Yet my Native friend and water protector, Sara, claims I know them all indirectly. “We’re all linked,” she assured me, “through the tragedy and triumph of womanhood.”

Yes, and I still have white privilege. No fortune 500 company is putting a pipeline through my water source and I have clean water while the predominantly African-American community of Flint, Michigan does not. That tragedy and triumph of womanhood also impacts us differently. Domestic violence makes home the most dangerous place for Native, African-American, Latina and white women, but Native women are more likely to be hospitalized for that violence. On some reservations, women are killed by intimate partners 10 times the national average. One in three Native women are raped.

It struck me that 80 percent of sex crimes on reservations are committed by non-Native (read: white) men. As non-natives, these men cannot be prosecuted by tribal courts. Rape of white women does go to trial, though as we learned through Brock Turner the courts tend to favor the white male perpetrators.

Our link as women may be contentious, cumbersome and imperfect, but Sara is right: we are linked.

I look up to the women at Standing Rock. One woman, Zintkala Mahpiya Wi Blackowl, gave birth at one of the water protector camps. She gave birth alone, delivering her baby by herself, as an act of resistance to the patriarchy and the pipeline. “I’ll birth where I choose,” she said. “It’s not for any man to tell me where I can have my baby.”  She named her baby Mni Wiconi, which means water is life.
Her decision to give birth without assistance near a battleground made the hair stand up on my arms. Native Women have a history of forced sterilization. They have lost their children to boarding schools and non-Native foster families. Like all women, they have had their bodies assaulted and exploited, their rights denied and their humanity questioned. 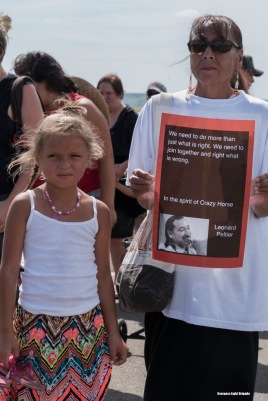 Zintkala Mahpiya Wi Blackowl took back her story, her voice, her body. This is the reclamation of power. This is resistance. This is leadership. This is turning tragedy into triumph.

I stand with the courageous, beautifully defiant and strong women of Standing Rock. I also stand united with the men. Our connection to each other as human beings is imperfect and wrought with relative power and privilege, but it endures. We will regain our collective humanity when we recognize, as Gloria Steinem says, that we are linked and not ranked.

Let us link with those at Standing Rock.

Ashley is an adolescent girl-focused practitioner and a writer. She loves coffee, cats and running.
View bio and all posts

Feminism in Yemen: “Now is not the time for women.”

When Nadia Murad Stood Before Trump

Take to the Streets & Demand your Rights