Who Says I’m a Bad Mother?

Women may often be described as goddess-like, but perfect we are not. When my daughters were born I was ill-prepared and scared, and I momentarily felt like I lost a sense of myself.

Don’t get me wrong – my little miracles were precious to me from the first hint that I was pregnant, but it was a major life change. Sharing these mixed emotions seemed to perplex people, as though I should have been ever-joyous, selfless and nurturing, even despite sleep deprivation and my body being transformed beyond recognition.

I was a working mother who also attended school but I wanted to ensure the girls were my first priority. I made sure I was home most days after they were dismissed from school. We spent our afternoons doing homework, laughing and talking as they eagerly told stories of their day. Each night, I was thankful that I was able to read to them, pray with them and tuck them in. And as soon as they dozed off, I cracked my schoolbooks open.

Everyone familiar with my dreadful schedule would wonder, “You’re so hard working and brave. How do you do it?” I didn’t think I was either of those things. I just knew I wanted to show my children what determination looked like and how love felt.

The girls quickly moved into their teenage years, which brought on some unexpected challenges. I suppose that’s the art of being a teenager, doing the unexpected. And this is when everything shifted. I was no longer seen as hard working or brave.

Instead, people began to insinuate that maybe I had done something wrong. No one seemed to consider the neurological and hormonal changes all teenagers go through. No one seemed to remember how hard it was to navigate friendships and relationships in high school.

I also wondered why people judged me so harshly. Yet, in my heart, I knew the reason why. Society has developed an unattainable definition of the role of mothers: all sacrificial, never tiring, never stopping and relentlessly giving. We are supposed to raise our children perfectly, to get them through their many milestones seamlessly and to maintain composure gracefully, all the while pretending that none of this is detrimental to our own well-being.

There were times I locked myself in my bathroom and wept until my brown face turned a shade of deep red, wondering what I could’ve done to turn things around. I considered quitting school or sleeping less to get more done. Guilt rippled through my body, leaving knots in my stomach and tightly wound blood vessels throbbing in my temples.

My responsibility was to be there to help them when they fell, and sometimes even to catch them when I knew the fall would be too hard. It was my responsibility to listen, to love and to share my wisdom. And knowing this reassures me that although I’ve made mistakes, every imperfect thing in their lives was not due to my inadequacies, and things happen even despite my attempts to protect them. Being a mother is not about perfection. In fact, it is an imperfect art and a glorious blessing. 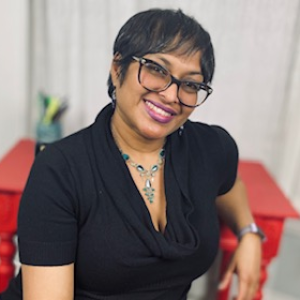