The following account, written by Aleta, comes from a Girl Determined Circle at a Buddhist monastery in a rural village on the outskirts of Yangon, Myanmar.

“They have beards…They are not welcome here…They are bad people,” explain the girls matter-of-factly when asked about Muslims.

In a country where divisive prejudices based on religion and culture have kept it at war with itself for over half a century, such beliefs are deeply rooted.  Myanmar is known for being predominantly Buddhist, a religion considered by outsiders as one of the most tolerant and peaceful, teaching that practicing kindness to others will bring an individual good karma. So, what has aroused such hatred towards another group of people?

Mud puddles linger on the small dirt field behind the monastery. The girls set up their makeshift bamboo-pole net and mark out boundary lines with small plastic cones, as they do routinely every week. Curious boys and younger children gather around the edges of the field to watch, and to fetch stray volleyballs.

The girls arrive in simple cotton trousers with t-shirts or light floral dresses, the muddy ground seeming not to deter them in the slightest. They go about their drills without hesitation – taking it in turns to set the volleyball back to the server, toes squelching in the mud and feet disappearing into puddles.  Mini matches follow, and in contrast with their early timid nature and orderly appearance, the girls’ behaviour gradually becomes more competitive as the session progresses and their confidence grows.

When the session ends, ‘Ma Josephine’, Girl Determined’s ‘Colorful Girls’ Sports Coordinator, sits down with a group of girls in their first year of the program. They have just completed a module on trafficking and safe migration, so the discussion veers towards unsafe situations and how to protect yourself. A few girls speak up to explain that they feel unsafe around men and around Muslim people. Picking up on the blatant discrimination and entrenched prejudices, Josephine reacts swiftly abut gently, bringing the issue closer to home by asking what the girls would think if a Muslim person came into their community.

“We would not like him…They would not be welcome here…He would be a bad person,” they answer without hesitation.

Similar answers continue until Josephine suggests the girls pause for a moment and think.  Using a calm voice, her next words seemed momentarily to stump the group: “What if I told you that I was Muslim? Would that make me a bad person? Would you not want to talk to me?”

“Well, we would still like you,” chime several of the girls, “We like talking to you…It wouldn’t matter then, because we know you and you are a kind and fun person.”

“So,” Josephine reasons, “just because someone has a certain belief or background that is different from you, does that mean that person is automatically bad?  No, it does not, because they might also be a nice and fun person.  Therefore, shall we agree that not all Muslims are bad people? And shall we perhaps not be too quick to judge someone based on a single piece of information about them, with a presumption that may or may not be accurate, but might instead be hurtful?”

There are nods of agreement and giggles from the girls, alongside a few genuinely contemplative faces.

Time is up and the session ends. That was all the time Josephine had available to unpack complex cultural myths, for it was only a short visit to a sports session, but already many of the girls had shown willingness to challenge the status quo. In that short time, a few girls’ seemingly steadfast prejudices had already been brought into question.

As you will have read in the media, there has been a recent surge in tragic violence in Myanmar’s westernmost Rakhine State. The violence, a complicated mix of communal distrust, military force and, of course, the realities of the history of the area, has prompted critical discussions in our weekly adolescent girls’ Circles.

Intended to be safe spaces, ‘Colorful Girls’ Circles and sports sessions enable girls to discuss issues, feelings, opinions and concern freely. Discussions about people who are ‘different’ are common and integral to our ethos. While a significant number of girls and staff in our programs come from minority groups, the composition of each Circle depends on the demographics of each community.

This session with Ma Josephine may have been the first time some of the girls had ever been prompted to think critically about their assumptions.  A seed had been planted in their minds, and even if they had not entirely changed their opinion, at least they had been presented with a different perspective and an opportunity to try understanding an issue that has fueled ongoing conflict for centuries.  In a country with one of the longest-standing civil wars, tolerance is nothing short of essential if peace and equal rights are to be realized.

While there is still much to be done, we are slowly but surely equipping more and more girls with the necessary skills and understanding around conflict resolution, human dignity, and the benefits of being ‘colorful.’ 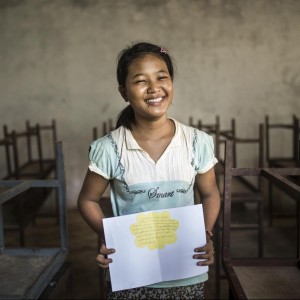