Here in the US, February is Black History Month. As a young Black woman, this time of year has always brought excitement. Growing up, I would learn amazing, interesting, and resilient stories about those who came before me. In more recent years, I have found myself looking up to several Black girls and young women who are making an impact in the world right now. As Black History Month comes to a close, I want to acknowledge and share the work of a few of these amazing activists.

Mari Copeny, 13, also known as Little Miss Flint, is a clean water activist from Flint, Michigan. She has been advocating on behalf of her community for the right to access clean water since 2014, when the residents of Flint began noticing their public water sources contained extreme amounts of lead poisoning. Mari has been a consistent and persistent advocate for clean water justice. She strives to “make sure people don’t forget about Flint.” I admire Mari for her courage and unwavering commitment to justice, even when adults don’t rise to the occasion in support of the same goal.

Kheris Rogers, also 13, is an advocate working on a future free from bullying. In the first grade, Kheris was bullied for the color of her skin. But she didn’t let it get her down. Taking matters into her own hands, she worked with her sister to launch the #FlexinInMyComplexion campaign across Twitter. After being met with a flood of positive messages, Kheris has built Flexin’ In My Complexion into a brand. They have sold over 10,000 shirts and garnered the attention of a number of celebrities.

In an article with Teen Vogue, Kheris shares her experience of being bullied for her skin color. I can’t help but resonate with some of her feelings and thoughts because of my own similar experiences at school.

I applaud Kheris for standing up for herself, sharing her story, and providing opportunities for other young black girls to acknowledge the beauty of their complexion.

Naomi Wadler, 13, is a gun violence activist. She highlights the effect that gun violence has – particularly on young African American girls. You may know Naomi from the engaging, honest speech she gave at March for Our Lives in 2018. Since then, she has continued to show up for her peers in spaces across the world. Naomi has spoken at the Tribeca Film Festival, the Teen Vogue Summit, and most recently at Davos 2020. I admire Naomi because she is firm in her fight against gun violence, and firm in making sure that girls and young women of color are always brought into the conversation. She is a true advocate for us in this space.

Vanessa Nakate, 15, is a climate justice activist from Uganda, and founder of Youth for Future Africa and the Rise-Up Movement. Uganda is very dependent on its agricultural sector, and so Vanessa has seen the effects of climate change firsthand. I first learned of Vanessa earlier this year when she attended Davos 2020. She was (unfortunately, yet unsurprisingly) cropped out of a photograph taken with other (white) youth climate activists. The incident has sparked conversation around the inclusion of African voices in the climate justice space. Since it happened, Vanessa has been working to make sure other African climate activists are included at the international climate justice table.

Who would you add to this list? Let’s celebrate and raise the voices of these inspirational young activists. 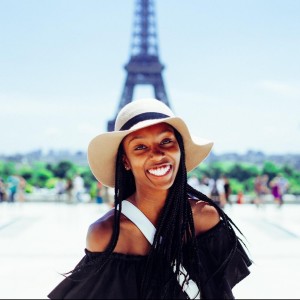 Hi, Khayriyyah (kuh-RYE-yah) here! I am a gender equity advocate focused on the empowerment of Black and brown girls across the globe. I currently work with the Ashinaga Africa Initiative-a international university scholarship organization for high achieving, low-income students from sub-Saharan Africa. I completed a graduate degree in Human Rights, Culture, and Social Justice where my research focused on girl's education and cross-cultural exchange. I am very passionate about all things youth and all things girl and excited to continue finding new ways to empower both groups!
View bio and all posts