Stories of motherhood and the female experience during war are often excluded and unexplored. This neglect shows in the little attention such stories get in the public discourse and in policy agendas. But without these stories, we miss the voices that are so important for development.

Many of the mothers I met while I worked in Uganda became a mother at a time when the conflict between Museveni’s government and the Lord’s Resistance Army (LRA) was in full swing. They started their journey of motherhood when murder, abduction, mutilation and rape were common practices.

Motherhood in a IDP Camp

One of these women is Grace*. Now a 50-year old married woman and proud mother of 6 children, Grace was only in her twenties when she and her children, including a baby, fled to a camp for internally displaced persons. The intensifying activity of LRA rebels in her community made it impossible to stay home safely. Though the camp was run by the government, and was supposedly a place to seek refuge, she felt very unsafe:

‘There was no hope of life. I thought I was going to be killed at any time … You cannot lock the house, you come back [to the camp] and you find faeces in bags thrown in your house. There was a lack of food … and if you don’t follow time [related rules] the soldiers beat you.’

When the war finally ended Grace and her family went back to their village. Sadly, though, life did not get much better for Grace.

Though the war has ended, it is inaccurate to speak about peace; the term ‘peace time’ wrongly implies a life free of violence and suffering. Even the term ‘post-conflict’ wrongly signifies a shift away from conflict and violence. To the contrary, many Ugandan women’s lives are characterized by ongoing experiences of violence.

Violence has to be understood in a very broad way and include the violence that results from social structures, such as poverty, patriarchy and ability. Grace is badly impacted by all of these.

The poverty in which she finds herself has determined many, if not all, of her life choices.

Because of it, she is withheld from seeking the specialist care she needs:

‘At times I get pain at my belly and at the side of my belly … When I dig for so long and even uprooting potatoes; I get the problem of the uterus. Up to now, [the] uterus always comes out. I was referred to look for a doctor who can help me but I had no money.’

The fact that Grace does not have enough money to go to the hospital is a result of several issues. Some of these are general, such as a drought. Specific for Grace however, is that she is limited in the amount of work she can do due to her displaced uterus and the resulting pain. Besides that, Grace is also the co-wife of an alcoholic husband:

‘I have a problem at home here, my husband is a drunkard. At this moment the marriage is not good, because I am the second wife to him … I am living with my children and he lives with the first wife. When I harvest crops which I could sell in order to support my family, he comes and sells it and uses the money on his first wife’.

Grace’s story painfully shows the struggles that many women in Uganda face today. It highlights how suffering and psycho-social ill-being result not solely from experiences of war and poverty, but to a large degree from being a woman.

Despite all that she faces, Grace is regarded as a role model and an example of a woman living a holy life. This is because Grace stands up against her husband’s violence.

Yesterday he wanted to fight me over the soy bean, but I am now stronger than him (laughing). I have a courageous life. If the man is fighting me, I just follow him with law, I call people.’

In times of marital conflict, Grace calls her brothers-in-law, and if that does not work, she steps to the clan chief.

Though her actions are far from all-encompassing solutions to her struggles, her courage is inspiring.

Due to her perseverance, Grace is understandably a role model in her community – she sparks hope for a different future for many Ugandan women.

*Grace is a pseudonym. The image accompanying this article does not depict the woman who told this story. 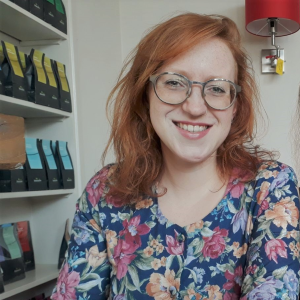